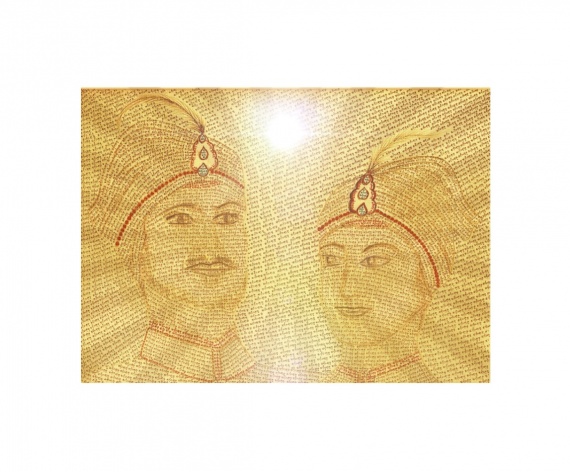 How does one even begin to pay obeisance to exalted God-Conscious beings – Shabad-roop – who sacrificed their lives for the welfare of others by first becoming exemplary instruments of the Divine Will?

How does one pay homage to these glorious revered beings who were blessed with the realisation that the body is only an illusionary vessel for the mortal and made the transition knowingly under the aegis and umbrella of their blessed father and forefathers?

The Tenth Sikh Master, Guru Gobind Singh ji, grievously lost all of his four sons while protecting the rights of the downtrodden during the reign of the Moghul Empire. His oldest son Sahibzaada (Prince) Ajit Singh was 18 and the next oldest, Sahibzaada Jujhar Singh, was 14 at the time. Well-educated in history, philosophy, riding and champions in martial arts of swordsmanship and archery, they went into battle bravely without any hesitation, knowing they would not return. Age was no barrier to their courageous and fearless resolve to follow in their ancestors’ footsteps by sacrificing their own lives.

They died but yet they continue to live in the hearts of millions.

The God-conscious being lives forever, and does not die.

This painting depicts the special bond of mutual love, adoration and camaraderie between the two brothers. The mantra written all over the glorious duo is a representation of their higher state of consciousness with the blessings flowing from their ancestors. Being spiritually awake, their consciousness was already one with the omnipresence of God.

With utmost love and gratitude Beloved ones.

Each painting comes with a Certificate of Authenticity.

All profits donated to the charity Khalsa Aid