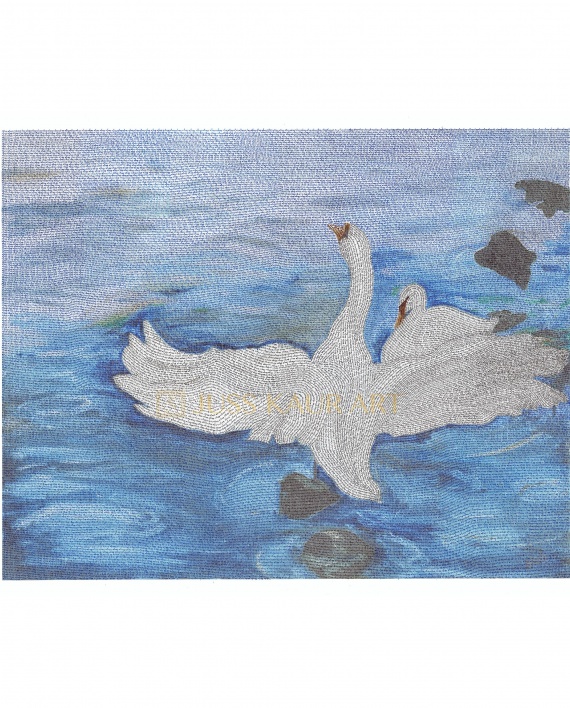 The pure swan-souls see the True Light of the Infinite Lord.

Wherever I look, I see the One and Only Lord.

The parmahansa (meaning “supreme swan”) state of the soul is a Sanskrit title of honor attributed to one who has acquired spiritual enlightenment. Just as the swan is equally at home on land and on water; similarly, the enlightened soul is equally at home in the divine and the materialistic realms.

The swan’s spirit is considered to be of such advanced and beautiful evolution that the bird and the spirit often become one. When the swan sings at the time of her death, it is said that she does so because her spirit is enraptured by her vision of the divine realm which she is approaching; and when she sings at other times, it is because she is bringing the sublime sweetness of those worlds back to the Earth with her as she once again crosses the threshold between the two realms.

The swan not only symbolizes spiritual transcendence but all the graceful qualities belonging to it – love, beauty, elegance, reflection, depth, dignity, grace, purity, stillness, solitude and self-discovery.

In this painting, the flight of the swan signifies the flight of the enlightened soul – a supreme soul, a master soul, no longer attached to the illusions of this world merging internally, within the consciousness, with the higher realms. As Parmahansa Yogananda writes in his book Whispers from Eternity:

“Inspire me to enter the infinitudes of divine love. O Universal Spirit, I would invisibly embrace as my own all animate and seemingly inanimate forms in creation. May I perceive even in stones, built of Thy secret atoms, the pulsing of Thine insuppressible life.” (P.13)

The word, Waheguru – ਵਾਹਿਗੁਰੂ – is pronounced “Wah-hay-guroo.” Wah means Infinite, hay means Thou, and Guru means Higher Self, or the Divine Teacher within each sentient being. This is the mantra which has been lovingly handwritten minutely in the painting in an attempt to portray this realization all around.

Be the first to review “Parmahansa” Cancel reply