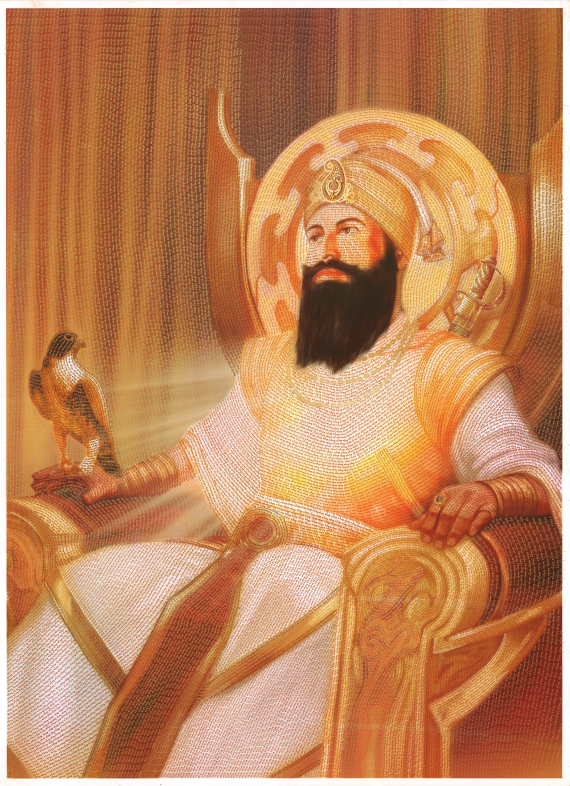 No portrait can capture Infinity. It can, however, bring attention to its magical presence.

An artist’s vision of their Beloved is definitely finite and subjective, but it perhaps holds the power to bring about awareness of the Divine Energy which was once manifested in the finite body of an enlightened teacher. It can at best lead one to the pool of nectar but cannot get one to drink of it. Only the Master can!

Recalled lovingly by many endearing titles such as Sahibey-Kamal, Shahey-Shehan-Shah, such is this vision of the Tenth Sikh Master, My Magnificent Guru Gobind Singh. There are no adequate words to define, praise or name Him but I would like to echo the words of Professor Puran Singh:

“Whatever He may be to anyone else, to me, He is the Creator who has cast Himself in the shape of His Song.”

When the Formless, Infinite, Divine Consciousness becomes not only manifest but is in its full realization in a finite body for a finite time, it produces a Guiding Light for all humanity which urges them towards their own divinity by breaking all tethers and bondages. The falcon-keeper (Bajan-wala – another form of endearment) steered all, especially the downtrodden, in the direction of recognizing their own oneness with Infinity; thus, he was called the emancipator of all, the warrior-saint! We recognize, with full understanding, the depth and authenticity of such a Beacon of Light – which lasted in the finite world from 1666-1708, which we call a Guru, but know is nothing but the Light itself- the same light that was in the previous ten forms.

So, when we see this portrait, we recall the Infinite Presence as we see the Waheguru mantra handwritten lovingly all over to remind us of our own oneness, our omnipresence – sadha ang sangeh – present always.