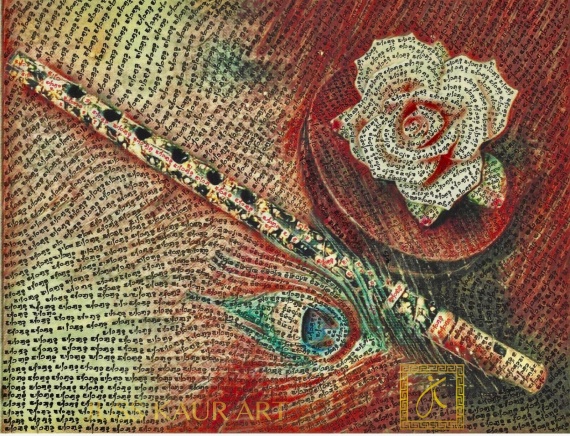 Finding the Inner Music 3: The Flute

Make your hands the cymbals, your eyes the tambourines, and your forehead the guitar you play.
Let the sweet flute music resound in your ears, and with your tongue, vibrate this song.
Move your mind like the rhythmic hand-motions; do the dance, and shake your ankle bracelets. ||1||
This is the rhythmic dance of the Lord.

The medieval mystic, Meister Eckhart thought the sound of the flute could mediate between humans and the divine. More than words, music enables a person access into the space within where one is more receptive to the power of the Spirit. Music conveys an experience of the divine. The melodious, organic, tranquility inducing simple cylindrical flute is probably among the earliest musical instruments discovered by mankind and therefore often associated with Gods. We can say that the Flute of God is actually that great sound current which soul rides upon in its journey to Its true home.

The flute has been mentioned in many ancient scriptures. Even the Neanderthals built flutes out of bone to express their inner feelings and to imitate nature’s sounds. The wide and slow wavelengths like huge, long breaths have the power to reach the inner soul of listeners. Lord Krishna’s flute Bansuri (bWsUrI) had the power to intoxicate animals and humans alike so much so that they lost consciousness of their bodies.

Krishna is playing on his flute in the forest, creating a joyous atmosphere,
With the musical modes like Vasant, Bhairava, Hindol, Lalit, dhansari, Malwa, Kalyan Malkaus, Maru etc.
Hearing the tune, the young damsels of gods, demons and Nagas are forgetting the consciousness of their bodies

Be the first to review “Finding the Inner Music 3: The Flute” Cancel reply