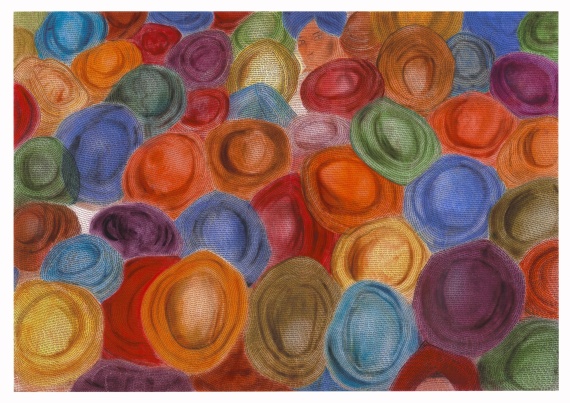 O my mind, you are the embodiment of the Divine Light – recognize your own origin.

Reproduction of a Michelle Shook original interpreted by Juss Kaur.

From a very young age, Guru Nanak, the first Sikh Master, refused to walk with the crowd. He rejected the sacred thread, discarded the caste system, preached against idol worship, recognized the equality of humanity, asserted the equality of men and women, condemned the Hindu practice of Sati, instructed women to discard the veil and removed stigma surrounding remarriage of widows and widowers. Recognising the Omnipresent, Omniscient and Omnipotent nature of the universe, Guru Nanak dared to be a revolutionary, standing up against the religious practices of the time, bringing a much-needed change.

Daring to walk against the current takes courage, but it is the only way to the inner authentic self. This painting shows the unfolding of a young man’s consciousness as he dares to look within and realizes that he no longer wants to be part of the hypnotic, materialistic sense of the world. In the awakened state, he recognizes the Divine Consciousness of everyone else waiting to be realized, albeit they are still mesmerized by the dance of life.

Be the first to review “Dare” Cancel reply