TELLING THE STORY OF 150 YEARS OF FAITH IN CANADA

The first purpose of the Thread is to let Canadians link to the stories of faith in their lives.

It’s to give us all space to set down our stories and place them, like outward spiralling mosaic tiles, side-­by-­side.

Its deeper role is to create, through the very act of intentional collection, the narrative argument that faith is real in Canada, and faith is vital to Canada.

It’s not to make a polemical or dogmatic or evangelizing argument. It’s to show the very existence of stories of faith in Canada proves faith is an essential part of the whole Canadian story. It always has been. It always should be. It’s a golden thread that connects us by signifying: ‘This is Canada. Faith matters.’

THE LANGUAGE OF FAITH

In late winter, I visited Juss Rani Kaur in her Montreal artist’s studio and watched her sprawled physically across the table where she was creating a new work. 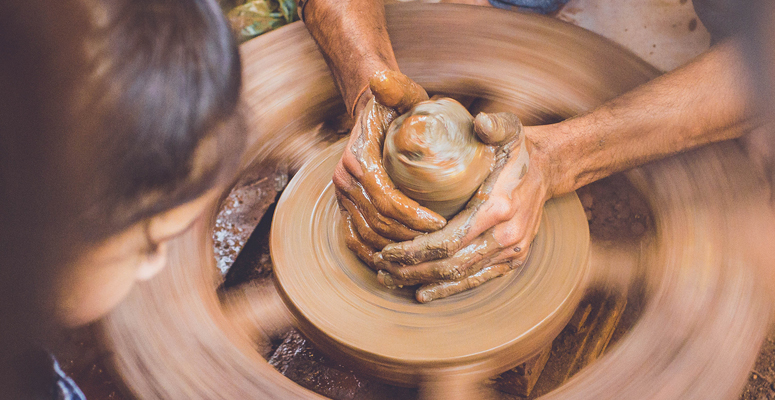 When she creates, Juss doesn’t stand apart.  She and the work are one. She brings it into visible being. It opens itself to deepen and enrich her Sikh faith. Indeed, even when she has reached the point where other artists might declare a work completed, she continues by penciling tiny letters of her mantra into its spaces.

Her art shares the language of prayer, she says, bringing her into unity with the one God of all things.

For the past 18 months, I’ve had the dream-work opportunity of gathering stories such as Juss Rani Kaur’s from Canadians across the country as part of the Thread of 1000 Stories project. The think tank I work with, Cardus, is behind a larger initiative called Faith in Canada 150, which is intended to ensure religious belief, religious tradition, religious voices are part of the country’s 2017 birthday celebrations.

It might seem on the surface paradoxical, but the joyful task of gathering stories of all faiths has further deepened my devotion to my own Catholic faith. To see the richness of life in faiths that do not know Christ is to make visible to myself the superabundance of joy present for those seeking to live each moment with Him.

What this requires, or at least what it has required of me, is the discipline to enter each story of faith as an opening to conversation without the imperative of conversion. Or, more precisely, to let conversation flow out while conversion is directed inward; that is, toward changing myself to live more fully with Christ. God, I must accept, will fill the hearts of others according to His will. My job, as a listener, gatherer, storyteller, is to imitate our Blessed Mother and ponder all things.

To do otherwise raises what I’ve mapped out as three risks of inter-faith work.

The first is drifting into easy syncretism in which the challenges of each faith are submerged into bland denial of differences between faiths. A friend of mine, who converted in mid-life to Judaism from Catholicism, calls it denying the truth that while religious belief has hard edges, they need not be jagged edges.

To fully appreciate anything actually obliges us to differentiate it from everything.

Even differentiation can lead to the second inter-faith risk, which is being drawn to the sheer novelty of a new faith – new foods, new music, new rituals, new friends – without accounting for the treasures being left behind. Rabbi Laura Duhan Kaplan, whom I met as part of my Thread of 1000 Stories gathering, says that’s why it’s important that inter-faith work be rooted in, and between, communities rather than just individuals.

It’s important,” Rabbi Duhan Kaplan says, “to be rooted in the community that loves and protects us.”

Loving, vibrant community can protect us from the seductive falsehood that is the third risk of inter-faith work. It is the illogic that because faiths differ, and each claims to be right, all must therefore be false. There are more than seven thousand languages in the world. “Mother, I love you,” is true in all of them.

We are fortunate that Canada is a country where hundreds of those languages are spoken, reflecting our history as a nation of diverse origins and multiplicities of ways of life. As we celebrate 150 years of Confederation, we are even luckier to witness the peaceful coexistence, in good faith, of people of all faiths.

As Christians, as Catholics, we have a uniquely wonderful line of sight for that witness because we are the faithful sent out into the world to imitate a Saviour who came not to condemn but to forgive and, above all, to love. We are called, in the achingly beautiful words of an Edmonton woman I interviewed for one of my Thread stories, “to be first responders to the Holy Spirit.”

In reality, of course, the gathering of the 1000 stories of faith is only a means, even a pretext. It has moved me but my journey to live with Christ began long before this national birthday party. It will end only in my longed-for union with him after death.

In that sense, I am a bit like one of the pieces of art Juss Rani Kaur creates in her studio. As she does not stand apart from her human creation, so God, so Christ, so the Holy Spirit never stand apart from me.

What a story of faith that is to tell.

Thank you Peter Stockland for crafting this beautiful story.

With Love and Gratitude