Art and The Divine 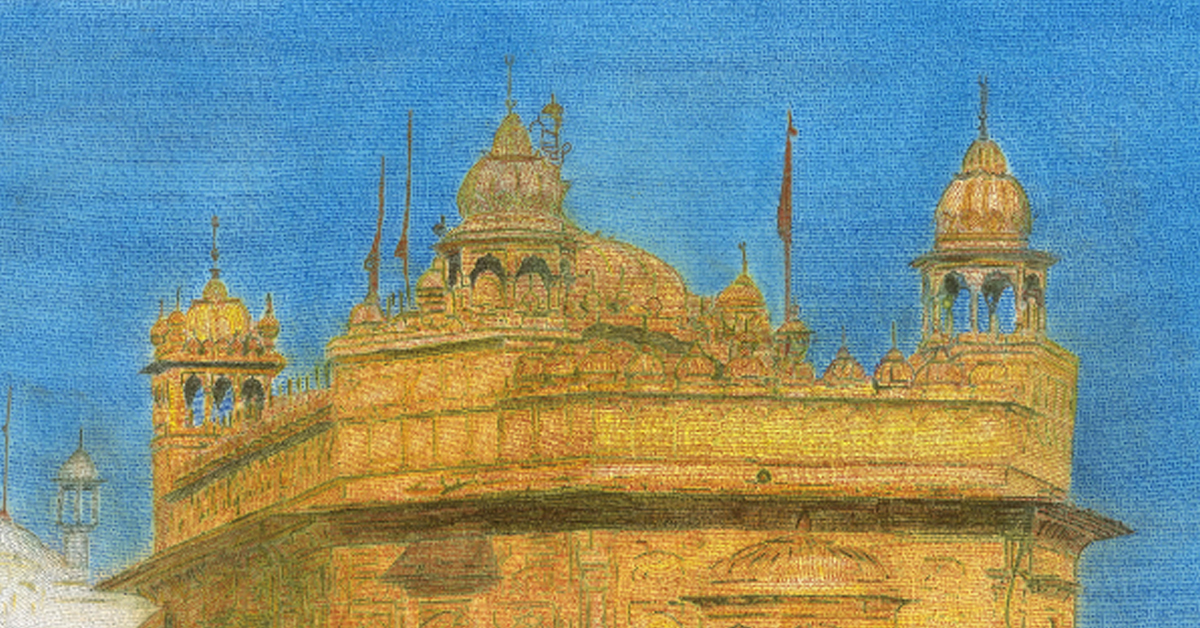 This weekend our Convivium team is hosting artist Juss Rani Kaur, transforming our office into a showcase for her “Reflective Mantra Art Series” as part of Sikh Heritage Month.

Publisher Peter Stockland reports on Kaur’s story and her connection to the Divine.

Senior Writer with and publisher of Convivium. Prior to joining Cardus, he was vice-president of English-language magazines for Readers’ Digest Magazines Canada Ltd.

Read the article here https://www.convivium.ca/articles/art-and-the-divine or below:

As part of a think tank dedicated to renewing North American social architecture, the Ottawa office of Cardus is not everyone’s idea of a show place for religious art.

But then as a mother of three adult children, teacher, Oxford PhD, and volunteer liaison in McGill University’s Office of Religious and Spiritual Life, Juss Rani Kaur might not be everyone’s picture of a religious artist, either.

Yet that she most definitely is. And this weekend from Friday April 21 until Sunday April 23, the soft-spoken, devout Sikh painter from Montreal’s south shore will transform Cardus Ottawa, the home of Convivium.ca, into a showcase for her “Reflective Mantra Art Series.”

The show, which follows Kaur’s exhibits in Montreal, Toronto and Vancouver, is being mounted as part of Sikh Heritage Month. It’s also as a charity event to raise funds for Khalsa Aid an NGO that provides international humanitarian relief according to the Sikh principle of  ‘recognizing the whole human race as one.’

It was evident when I met with Kaur earlier this year in her office at McGill, and later at her home in suburban Brossard, that the exhibition represents a full blossoming not just of her artistic gifts, but of the way her deep religious faith infuses and is inseparable from the work she creates. Or, conversely, that creates and re-creates her.

“One of the pieces I have is called ‘The Spiritual Blossoming’ and it comes from a time when things were first really starting to blossom. It’s a peacock, and it’s in full colour plumage. That joy, that bliss, that love, the peace that’s inside is all just coming out. Because of what? Because of your consciousness changing and aligning itself with the Divine,” Kaur says.

“When I first felt that, I would ask: “How do you show that?” And then I saw it just happens, and I remember saying to myself ‘Ah, that’s what it is.’”

“Watching her work in her studio is like watching a pilgrim, penitent or worshipper settle into wholly peaceful communion with God.”

Bringing that elusive “what it is” to light has been part of a long process of discovery, one that ineluctably entwines art and faith, and not merely in a metaphorical way. The visual works being shown at the Cardus office on Rideau Street this week comprise a variety of subjects but have one stunning commonality. Inscribed in them are thousands of the miniscule hand-written mantra that Kaur uses in her meditative prayer.Watching her work in her studio is like watching a pilgrim, penitent or worshipper settle into wholly peaceful communion with God. There was the intensity of focus natural to artistic endeavor, but beyond it a kind of spiritual spreading mirrored physically in the way she relaxed across the canvas while tucking her legs tightly, intricately into her work chair. When she works, she covers her head and shoulders with black cloth not to much to screen the world out as to keep her attentiveness to God contained.“I go to God, to the Divine that is everything. I don’t bully it into silence. I just allow it to go in there, and it settles down by itself. There comes a time when I think ‘Yes, I am with you.” Because it’s true. We are always already with the Presence. It’s an illusion that we are separate,” she says.“I find the same feeling whenever I go into any place of worship. There’s the same omnipresence that I want to show in my paintings. Everything is Divine. There is nothing else but that.”

Kaur was born in Nairobi, Kenya. Her father died when she was four. Her mother did not teach her much about the Sikh faith directly, though Kaur has childhood memories of watching her pray, especially at times of unhappiness. It sustained Sikh identity, though not necessarily strict devotion, when the family moved to England before coming to Canada in 1967.

She got an undergraduate degree in chemistry at Concordia, then a graduate degree from McGill, taking up the life of wife, mother, and teacher, patiently waiting for something more, something deeper, something she always knew she would blossom into.

The first flowering began almost incidentally. She was invigilating an exam for the class of gifted students she taught, and idly picked up a red pen to begin drawing a picture. Suddenly, she found herself writing the mantra within it.

“I looked at it and said,  ‘oh, that’s nice,’ and never thought more about it. There was no reason for me to. But then I went home, and I just had to finish it. And I knew what it was telling me: that this is what it’s all about. Art speaks to the heart. It speaks to the soul. And my whole goal or inspiration has become: ‘Can my soul speak to yours through art?’”

In mid-life, Kaur was at last able to fulfill her educational dreams when she entered the doctoral program at Oxford University. The hard edge that emerged there was a serious questioning of her faith. It was a difficult, uncomfortable time until a friend taught her to regard her faith as a tool to be applied in an appropriate way to the appropriate situation. After she returned to Canada, bearing the Oxford DPhil that would open teaching and research positions at McGill, the application of faith to art became a way of life.

“I told myself to work every day for five to six hours. I would set aside my thinking things, then go into meditation. The questions stopped. My faith was, with His grace, restored.”

For Cardus, of course, restoration of faith to its proper place in the public square is a key part of the renewal of North American social architecture. Though not a church or an evangelizing organization, the think tank does proudly draw on 2000 years of Christian social teaching to carry out is mandate. And Convivium.ca is, first and foremost, about fostering faith in common life.

So, our Ottawa office as a showcase for art that points to the sacred imbuing the world, painted by an artist whose purpose is to speak to the soul through her work? What could possibly be a more faithful fit?

Convivium means living together. Would you join us in continuing to open and extend the conversation? Do you know someone who would enjoy this article? Send it to them now.

With immense gratitude for your kind and generous words Peter!